Get it from the link below with more detailed release notes:

First thing I noticed after launching:

Text: Simple is absent from Open other

And it won’t launch from the Filters list.
(tried a few other filters, they launch OK)

Also, Text: Rich is absent from the filters list.

I reproduced the problem on Windows (not Linux or macOS).

UPDATE: The problem above has been fixed and version 21.04.14 for Windows uploaded to the beta download page.

@brian, was anything with improving the Blend mode you mentioned here:

I have to admit that the blend mode is very crude. I believe that we occasionally see frames blended when the speed is 1.0000x due to rounding errors. I think that instead of adding an option, I just need to make the blend mode match people’s expectations.

I will keep this in mind and look for a good opportunity to improve the blending logic.

done for this version?

done for this version?

I did not make any changes to the blend logic.

There’s a problem with proxies. In 21.03.21 if I drag a clip to the playlist and then click on its properties, it shows resolution “640x360 (PROXY)”. I can drag it to the timeline and click properties there, and says the same thing. If I close then reopen the project, both remain the same.

Obviously, this makes it rather impractical to work on high-resolution projects, since it’s using the original files rather than the proxies.

For example, put a clip on the timeline and change its speed property. Save then reload the project. Change the speed again, and now notice that it says proxy at the wrong resolution. 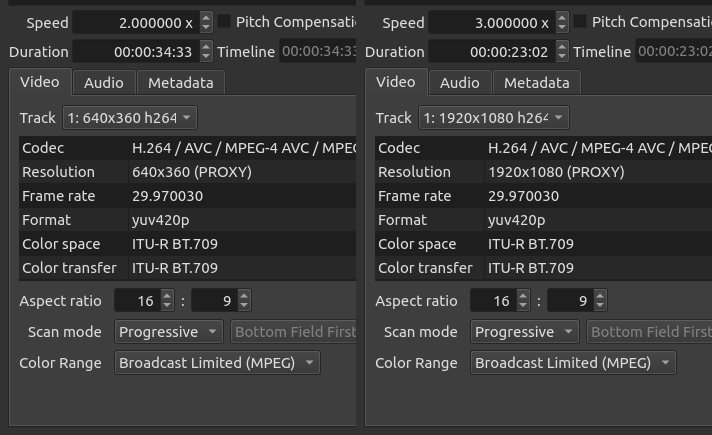 There’s a problem with proxies. …when I reopen the project now both the playlist and timeline clips have resolution “1920x1080”.

This is fixed for the next version.

Update: this is also fixed for the next version.

I found some time to do some testing.

1) The “Use sub-clip” option is not working as expected. When the clip is replaced, the converted sub-clip does not start on the frame that the original sub-clip started on. It starts the sub-clip from somewhere else in the source footage.
2) After making a sub-clip I don’t get extra footage on both sides. I get 30 extra seconds from the right side only. I suggested bumping the extra footage up on both sides from 15 seconds to 30 in the previous beta thread for Time Remap so I don’t know if this is the result of that.
3) I don’t think the “Use sub-clip” option should be in the Advanced Menu. It’s going to be a very commonly used option so it’s better to have it quickly accessible. Moving it up to the normal menu would be preferable so as to not have it sort of hidden. Alternatively, but I don’t know if it can be programmed this way, the “Use sub-clip” can be automatically turned on by Shotcut depending on where the option is called. If it’s called from the whole clip then it would be off but if it’s called from a sub-clip then the sub-clip option would be turned on by default.
4) When the sub-clip option is used the default name for the converted file still adds “Converted” at the end just like it does if it was converting the whole source clip. I suggest making the default file name different if it’s converting just a sub-clip. Maybe something like “Sub-1”? I am thinking of a use case where users would be applying Time Remap more than once on the same source file in one project. If that is the case, is it possible that Shotcut can be programmed to have the default names number down the subsequent sub-clips in one project? Like Sub-1, Sub-2, Sub-3, etc…
5) There are some video files that are bypassing the B-frames dialog after applying Time Remap. Here is one: The Bruno Mars video from youtube “Leave The Door Open”. Here is the direct youtube link.

When it it’s applied, this is how the key frames are laid out by default: 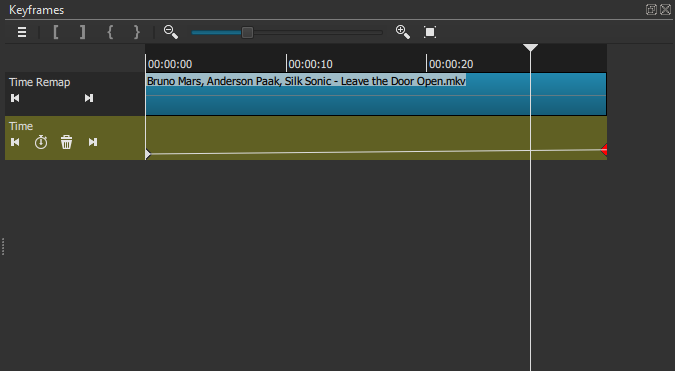 Suffice it to say, despite the filter being added the keyframing just doesn’t work.

For what it’s worth, here are the video and meta data info for the mkv file I downloaded off of youtube: 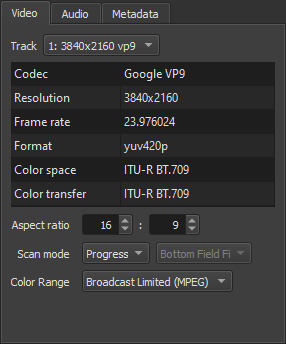 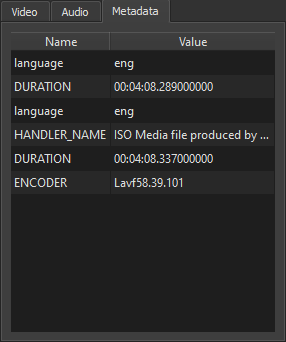 I’ll get more some time later on to do some more testing.

Here is one: The Bruno Mars video from youtube “Leave The Door Open”. Here is the direct youtube link.

That link takes me to youtube. Can you provide a link to a file I can download?

Are you SURE the video has b-frames? I have found other VP9 files in the past that do not have b-frames. The Shotcut properties panel does not report if the file is encoded with b-frames.

Are you SURE the video has b-frames?

Also, Keyframes is OK for me after adding Time Remap (I am using development version) 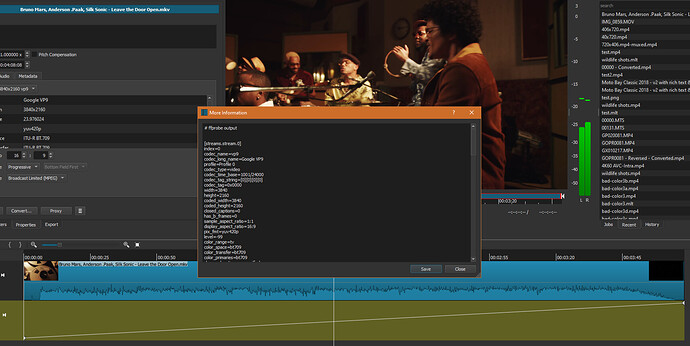 1) The “Use sub-clip” option is not working as expected.

This is fixed for the release.

3) I don’t think the “Use sub-clip” option should be in the Advanced Menu. It’s going to be a very commonly used option

It is advanced in that most beginners or casual users will be confused about the concept of a sub-clip, however, I also agree it may be frequently used by many. One way to remedy this is to not make Advanced collapsed/hidden but to show it all under the heading Advanced.

It is harmless to turn it on for a whole clip, but it does affect the scope of the subsequent replace operation. With sub-clip on, it replaces only the selected clip, and without it replaces every timeline clip based on the original source. I will think about this more, but it might be tricky to add because of the disparate code components and how this same dialog is triggered for multiple situations.

Are you SURE the video has b-frames?

Ok. So this is working correctly. Besides the “More Information”, there is not an easy way for a user to know that a file does or does not have keyframes. Maybe something to improve in the future.

Also, Keyframes is OK for me after adding Time Remap (I am using development version)

Same for me.
@DRM I wonder if there is something unique about your environment or installation that keyframes are not working properly. You had some similar reports in the last beta that I could not reproduce. Do you have access to another computer you could test these same cases on?

Well, I learn something everyday.

I didn’t expect that youtube uploads were done with no b-frames.

However, in regards to the keyframes I should’ve been more specific. @shotcut, you added Time Remap to the whole clip for that picture you took. When I did my picture to show how low the default last default keyframe was, it was on a split clip. In this new version, it seems that the way the keyframes are now mapped is absolute and not relative to the sub-clips.

Here is how the default keyframes are mapped to a split section of the video from the beta version of the Time Remap: 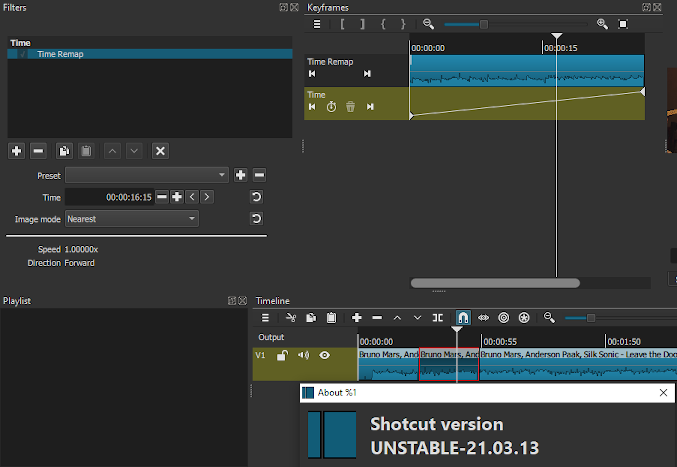 Those keyframes are relative to the sub-clip with the last default keyframe being at the highest point which is the last frame of the sub-clip.

But here is what happens with the exact same split section of the video in this version: 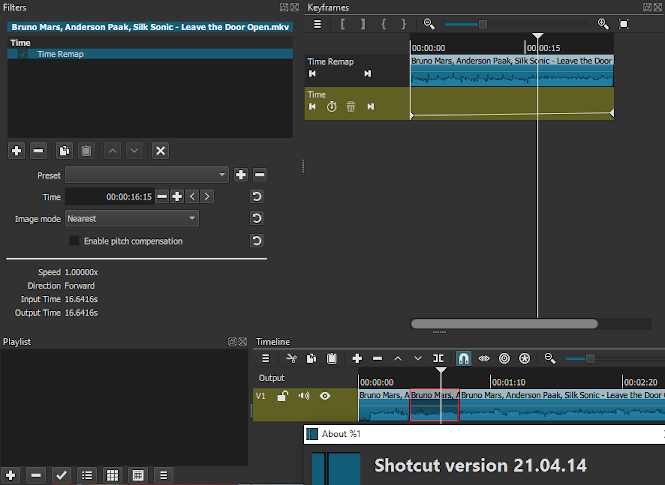 The default last keyframe is lower and when I was trying out it seems that in this version the keyframes are mapped out to sub-clips in an absolute way. So the last default keyframe is lower because that’s where that frame is found if the keyframes were added to the whole source clip. I don’t think this was intentional because this doesn’t make it very usable to keyframe if the default keyframes are not mapped out relative to the sub-clips. What if the source clip is a 2 hour video but the sub-clip is 30 seconds?

Also, @brian, I think that the placement of the Input and Output times should be on a separate column. So instead of this:

That way the Input and Output times don’t get so easily cutoff when the Filters panel is made smaller.

I wonder if there is something unique about your environment or installation that keyframes are not working properly. You had some similar reports in the last beta that I could not reproduce.

Later I am going to try again with this version the bugs in the beta that you said couldn’t reproduce. Hopefully it’s not something regarding a Windows update. I made a report almost 2 months ago regarding the layouts being screwed up every time when I open Shotcut but @shotcut said he couldn’t reproduce it either.