Normally I post a bug report when I have already figured out what the cause for a bug is. This time though I am calling attention to a critical bug that I have experienced a couple of times on the latest version 21.02.27 but have still not found the cause.

It seems similar to the previously reported bug back in the beta thread for 21.01:

Confirmed. There is an issue here. I started a project with the nightly build from two days ago and in that project I took one small clip and slowed it down in Properties to 0.25 and I reused that slowed down clip 3 times. I was able to export the project in that same session but when I closed it and opened that mlt file with the nightly build from 2 days ago I got the exact message that @dailylolrecap posted up when I pressed the Export button. It wasn’t until I deleted all 3 instances of that…

Like that bug something would be done in the timeline that would prevent the project from being exported by way of this message popping up after clicking the export button:

Well, this time the above would happen but then when you close the session and repoen the mlt file, this kind of message would appear: 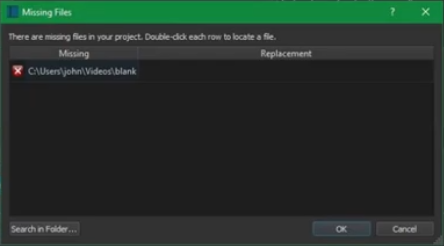 So it lists the source file as “blank” like the above image shows which makes no sense because that of course was not the name of the file, it has no extension listed and no files were moved. It seems that the mlt file gets corrupted somehow.

Like I said, I have not found the cause for it yet but someone on youtube very recently posted a video with an issue that seems very similar: 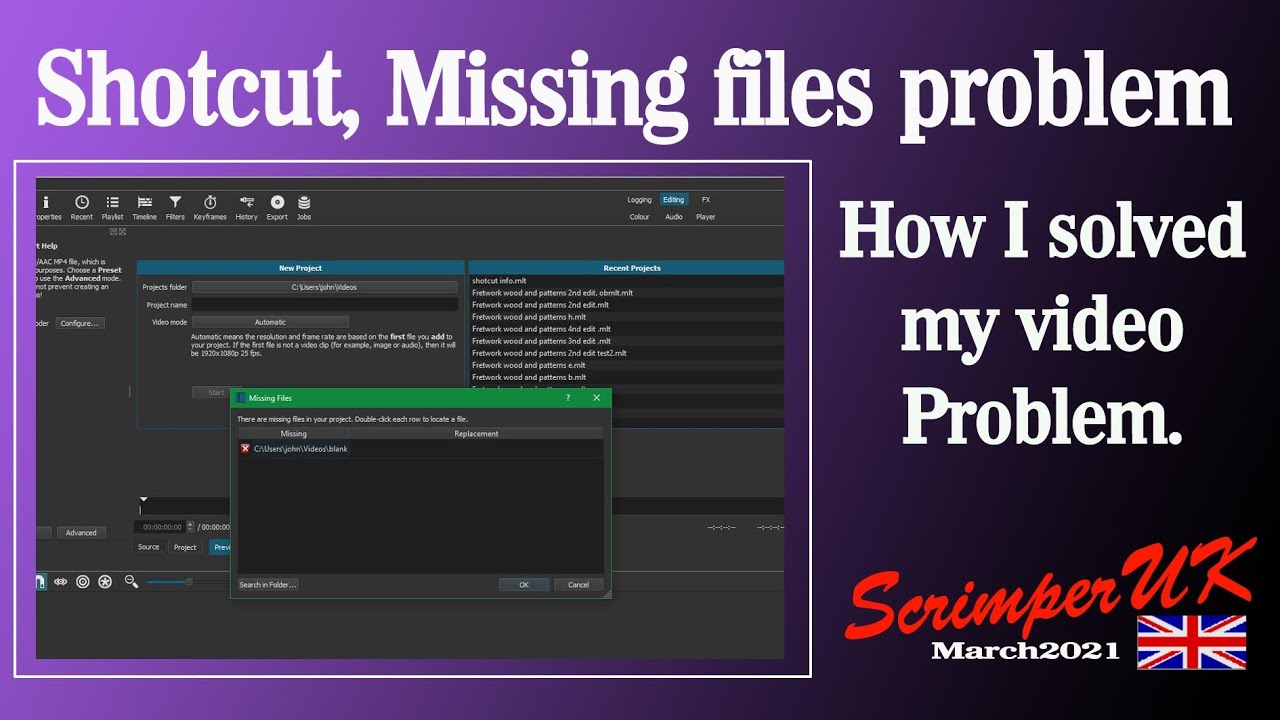 His video is about showing a workaround to deal with the bug. Judging from the comments on his video many other people are experiencing this too. @shotcut you may want to ask the above person from the youtube video if he would be willing to share that corrupted mlt file of his with you so that you can look into it. I don’t know though if his cause is the same as what I experienced but it’s worth asking if he still kept that problematic mlt file because this bug is pretty critical.

I’ll keep trying to reproduce it on my end to see if the issue matches his. If anyone else also experiences it please post in this thread.

If anyone else also experiences it

Thank you @DRM for posting this as a bug. I have been hesitant to do so, because (1) it does not effect me directly (2) I haven’t personally experienced it, and (3) seniority and stature that I haven’t earned yet in this venue.

What I have been doing is tracking it and seeing the pattern emerge,
@DRM, you are the fourth (or more likely the 5th; one unconfirmed.) to report this problem here. Multiply that by the ratio of field experiences by users to those who make reports…

Once is happenstance.
Twice is coincidence.
Three times is…

I have searched the forum.
No one has been asking for help with a missing file named “blank” until about two weeks ago.

Now there are at least three such cases.

(There was a fourth that I suspect is the same, four days ago, but the question “was it named blank” was never answered.
A fifth suspected case was eliminated; the file had a different name.)

There has been a mysterious “…some sequence of user actions…” that has been causing these tiny artifacts.

But it seems implausible that suddenly this month many Shotcut users all simultaneously began micro-adjusting tracks, which no one had ever done before.

It looks more and more like something changed several weeks ago, perhaps on or about the 29th of January, that is causing Shotcut to handle these micro-adjustments differently.

And now, thanks to the careful observation and reporting by @alanclarkeau, we may have a way to reproduce it.

(Those posts contain the links to the other cases reported on Forum.)

Basically the video is a different report of the same thing @kagsundaram linked to and provides the instructions for what I did to fix it in that thread. But nowhere closer unfortunately.

I too have seen this, though it was before I figured out how to create a workflow without duplicating .mit files.

Which I did because I was seeking to preserve formatting without having to re-do everything though it created problems of it’s own, one of which was that I had to delete all the files connected to the prior project (which the .mit file I was working with was originally linked to because despite renaming it, all it’s properties as a file from a prior project remained intact).

And oftentimes a “blank” file would turn up that would need to be relinked, which I just associated with any file from that original folder and everything reconciled.

And while what I described doesn’t sound like how you encountered this issue, I’m just putting it out there in case you can find it of use.

And it’s worth mentioning that since I stopped doing that I have seen no “blank” files.

I made a change so that “blank” and “<tractor>” do not appear as missing files or block export. That does not fix the root cause of how these are introduced, and it does mean the root issue will be masked further in the future. I have heard people report about this in missing files or the related “INVALID” in video output for years here and on social media. “INVALID” may appear due to an invalid <tractor> but also for other reasons. It seems for the “blank” issue I have manually fixed for people that it often does not show as something ugly and unexpected in the output because blank is, well, blank.

The recent uptick in these incidents is mainly because version 21.01 added a check at export that is blocking:

Fixed Export File does not check for missing files.

Meanwhile, its appearance in Missing Files has been easily ignored. We added an Ignore button to this export error dialog for the next version.

I am facing a similar issue. After exporting my project the .mlt file is now (more or less) blank.

It doesn’t include any of the original sources in the MLT file after export. When opened in Shotcut it shows a blank white project with no timeline or tracks.

I lost about 2 hours of work because of this MLT getting corrupted.

Any timeline or workaround on a fix of this? Is there a version I should downgrade to for the time being?

Any timeline or workaround on a fix of this?

The problem you describe is different and not a known, accepted problem. So, there is no fix pending, and downgrade is unlikely to make a difference.