hi, when it announced tha i can move video freely, i thought i can just drag and drop media into timeline and it will automatically add new track. but i dont know if this is a bug, but i still need to create a new track (audio/video track) and drag my video-for video track / audio-for audio track into the new track.

sorry not a native speaker…

when it announced tha i can move video freely

Your post is invalid in this thread. And, no, it is not required to add a new track first.

Thanks for the Vectorscope, a welcome addition, however the graticule markings are almost invisible, in particular the red, magenta and blue 75% marks

Added Filters > Video > Rectangle .
This is an experimental video filter that uses the Qt Quick QML side of WebVfx.

Thanks for this expected new feature.
I think in next versions, circle and ellipse will be added 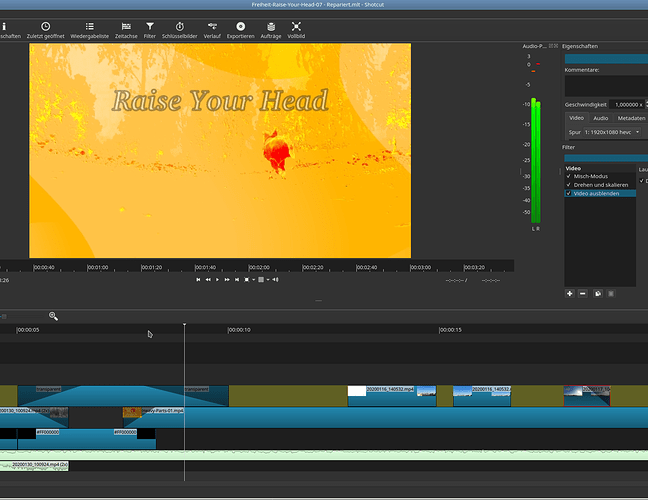 If I use 360 the Preview starts with stutter where the FadeOut begins and remains on ‘Heavy-Parts-01’ until a next part.

The new vectorscope is awesome! I agree that the blue markers are difficult to see. Just wondering, would RGB values in the tooltips be useful to anyone else? I’m wondering about comparing colors quickly between GIMP and Shotcut without having to export a frame.

Preview scaling is phenomenal. I don’t have any bugs to report, but I have results from two tests that illustrate the performance gains:

If I replace the color grading filter with a Text: Simple filter, it stacks to 15 tracks.

The opacity filter is critical to the test because I believe Shotcut still has an optimization that says “if V5 is fully opaque, then don’t bother compositing V1-V4 since they can’t be seen anyway”. The opacity filter forces compositing and activation of all filters across all tracks for a more accurate measure of performance.

For previous projects, I had set the video mode to 360p using 360p proxies to get this kind of editing performance, and I see improvements in the new Preview Scaling feature that beat the old method. I was surprised to see Preview Scaling maxing out 8 of the 16 cores, whereas the old method would usually use 4, maybe 6 on a good day, but none at 100%. Also, the old method was only able to stack 18 tracks whereas Preview Scaling can do 21 (this is using the same hardware for both tests), so this is win-win all the way around. I’m very excited, as you can tell.

Specific note to @Earlybite (I hope I’m not breaking the thread rules by commenting on this since the stuttering thread was closed): You asked about performance of a 4-thread processor vs. a 12-thread processor. These test results suggest that a 4-thread processor with proxy sources could possibly be sufficient in 360p scaling mode. However, with 12 threads, proxy generation and export encoding will go significantly faster, and the preview while editing at 360p scaling should also benefit significantly since the preview appears able to utilize 8 cores efficiently. Let’s open a new topic if you want to discuss further to avoid cluttering this beta conversation.

At the risk of sounding greedy, could an option be added for 480p preview scaling? It’s an even multiple for 1440p monitors like the Apple Cinema LEDs that has an extremely good balance between picture quality and playback performance. I’ve noticed that using 480p proxies with a 480p video mode scales up cleaner to a full-screen external monitor than 360p/540p does to 1440p (using bilinear scaling for speed).

One issue to report.
Add a video, image or color clip to the source viewer or timeline.
Add size and position filter, select distort mode, resize the rectangle. The image will not fill the rectangle.

This is fixed for the next version.

however the graticule markings are almost invisible, in particular the red, magenta and blue 75% marks

Can you elaborate on this? They are subtle on purpose so that they don’t obscure the vector data. I can lighten them or make the larger, but then they may hide the vector data. Additional thoughts would be appreciated.

Just wondering, would RGB values in the tooltips be useful to anyone else?

I think this is not possible. The vectorscope only displays the chroma values (hue and saturation). It does not show the luminance values - which would be needed to calculate an RGB value. Or maybe I am misunderstanding the suggestion?

I’m wondering about comparing colors quickly between GIMP and Shotcut without having to export a frame.

This is what the zoom scope is for. Please give it a try and let me know if it meets your needs.

I just noticed that the vectorscope tooltip has an error when it is outside of the scope. I will fix this for the release.

It does not show the luminance values

Yeah, I didn’t think that one through. Ignore me.

I tried the Video Zoom earlier today and it does exactly what I was looking for, but I was wondering before really thinking if the RGB functionality could be combined with the vectorscope to reduce the number of scopes on the screen for real estate reasons.

EDIT: I recall thinking that the FFmpeg avfilter.vectorscope filter allowed the color of the data in the vectorscope to represent the average or peak luminance at that UV value. I’m not requesting this as a feature, but it gets me thinking again about how much data can be packed into a vectorscope.

By the way, I love the multitude of scopes available now. Much appreciated.

the graticule markings are almost invisible

In a room that has any amount of ambient light, it is difficult for my eyes at a reasonable distance from the screen to reliably detect the difference between the black background and the 75% blue mark in particular. I’ve got a calibrated Apple Cinema LED monitor, meaning it isn’t eye-blazing extra bright like a lot of monitors. Blue looks very dim on it. The RGB values of the Alexis Van Hurkman scope were RGB(0,0,255) but it’s showing up as RGB(0,0,85) on my computer. It’s really dark and really thin. Any chance HiDPI mode would make the lines extra-thin for some people?

I keep my ambient light down and my monitor is as near calibrated as I can get it, so it is not set exceptionally bright either. I sit about 1 1/2 metres away from it and, even if I set the vectorscope to maximum size, which is not usually practical, the red, magenta and blue 75% marks are almost undetectable. For me they (all) need to be brighter, bigger would help too. I find the vectorscope trace obscures the 75% marks when put over them.

however the graticule markings are almost invisible, in particular the red, magenta and blue 75% marks

Can you elaborate on this? They are subtle on purpose so that they don’t obscure the vector data. I can lighten them or make the larger, but then they may hide the vector data. Additional thoughts would be appreciated.

Are the graticules not the defined acceptable limits for SMPTE 75% bars? Making them bigger makes them useless.

Just wondering, would RGB values in the tooltips be useful to anyone else?

The use case of comparing Rec.709 RGB values to GIMP’s sRGB is not valid.

They are subtle on purpose so that they don’t obscure the vector data.

When I push saturation to make the trace extend past the 75% and 100% marks, the trace data covers (overlays) the marks and completely hides them. I guess I’m not seeing how these marks can obscure vector data if they are the lower layer.

I agree that marks can’t be made very thick because that makes finding the 75% point less precise. But if the marks were less wide but lots brighter, wouldn’t they be both visible and less obscuring even if they were the upper layer of compositing?

The use case of comparing Rec.709 RGB values to GIMP’s sRGB is not valid.

Does this statement effectively suggest that the Video Zoom scope is also not valid?

Added support for using a video clip in Transition Properties > Video .
This is handy to use with @jonray’s matte transitions.

Can someone elaborate on this feature?

Hi folks, I searched the net and found 161 short matte (black and white) MP4 video clips which can be used to create interesting transitions in SC using the Mask:From File filter. I’ve collected them together in to a folder and categorised them into 7 subfolders - Brush and Paint Strokes (24 designs) Circles and Clocks (28 designs) Lines and Rectangles (56 designs) Other Shapes and designs (Honeycombs etc) (16 designs) Splat and ink transitions (13 designs) Squares, Diamonds and Grids (2…

Hey Thanks. I should have explained better. I am aware of the transitions I was just wondering how Shotcut supports those transitions now. I went to Properties - Video …but what then…

If you have the same value in sRGB and 709RGB, you don’t have the same hue, brightness and saturation. It’s a small difference, but it is different.