BEFORE YOU POST A REPLY ABOUT A BUG READ BELOW.

The purpose of the beta is to find new problems that block release. We are not trying to fix everything wrong that can be found before the release. Therefore, we may not respond to your reply or address it in the release.

This beta adds the ability to move multiple-selected clips on the timeline. I am already aware there are some new undo-related bugs associated with this change that I am working on prior to release. Please do not report about this.

Hi Dan,
Bug report:
I just downloaded 19.12. I loaded a project I was working on (works fine in 19.10) which contains just PNGS with transitions, and all I get in the viewer is INVALID. Screen capture:
Looks to me as if this is a serious bug?

I loaded a project I was working on (works fine in 19.10) which contains just PNGS with transitions, and all I get in the viewer is INVALID.

I started a new project in 19.12 and imported some pngs - seems to work fine:

Will try to send the project file.

Original file still not working, but the project file (repaired by SC) I sent to you (zip) now works, after I had to specify the new location for the PNGs on SC startup.

Original file still not working, but the project file (repaired by SC) I sent to you (zip) now works, after I had to specify the new location for the PNGs on SC startup.

I reproduced it and fixed for the next version 19.12.
This problem affects any project using relative paths. Yes, a repair works but this is a big inconvenience for testing. I might post a new beta but until then the workaround is to save and repair.

Thanks Dan. I’ve reverted to 19.10 to carry on with my project but will go back to 19.12 when it’s finished. Thanks for adding the ability to move multiple clips. Will be a very useful feature.

Drag and drop an MP3 file from the file manager to the playlist panel . The file does not play in the source viewer. File new stops working. Shotcut becomes unresponsive. Cannot shut the application. Have to use task manager to close Shotcut.

The only audio file that causes this behavior is mp3. Drag and drop wav, m4a, ogg, aac, flac from the file manager to the playlist panel works fine.

Did you test these things against current release version?

Works for me with or without album art.

This changed in a previous version intentionally.

Did you test these things against current release version?

Works for me with or without album art.

Two questions about the Gradient filter:

I tested it on a transparent clip.

Can the Size and Position values be made keyframeable?

Yes, but I forgot to mention this filter only supports simple keyframes for Position and Size only due to a technology mismatch between the frei0r backend and the Shotuct UI with respect to a rectangle data type (frei0r lacks it).

I am still thinking of simple, clean, and obvious way to indicate which parameters participate in simple keyframes. Bold labels? An icon like that looks like a trapezoid or {} placed where: before label, after label, in a column after the reset/undo button?

I am still unable to reproduce trying multiple ways. It probably depends on something specific:

This happens with Windows 10 1909. Haven’t tried Linux.
As of this morning it is still happening

It might have something to do with my system and not Shotcut.

It seems the issue is with my Windows setup.

19.12 Beta only moves the clips to the right. When a clip is pulled left the clips on the right do not move.

I reproduced this and fixed it.
I also found that combination of ripple, multi-select on same track, and dragging to the same track is crashy and nonsensical. I fixed that too by using the leftmost selected clip.

I am still thinking of simple, clean, and obvious way to indicate which parameters participate in simple keyframes. Bold labels? An icon like that looks like a trapezoid or {} placed where: before label, after label, in a column after the reset/undo button?

Speaking of text boxes, the ones for the Simple Keyframe buttons like for setting the start and end for trimming should be updated so that they say what the shortcut keys are for them.

So here are the issues I found so far with this beta:

4 - If the above is a feature then there is a bug related to it. If a clip is overwritten by a second clip below the first clip, undoing the action will mess up the timeline. In some cases, undoing and redoing the action can even cause Shotcut to crash. Demo.

5 - Changing the speed of a clip in Properties will change from where the clip is taken from the timeline. This happens whether you are slowing down or speeding up a clip. In this demo, I cut a section from the video clip that comes in a little over 1 minute in. I go to slow down the clip in Properties and after I do that the clip now plays from the beginning of the whole video file. I show in the demo the first and last frame of the clip before I change the speed to show that the clip is taken from that one specific section. After I change the speed of the clip, I go back to show the first and last frame of that same clip to show that it is of a totally different part of the video which is from the very start.

7 - There are times when moving multiple clips ends up overwriting clips that are in the same line of selected clips instead of just moving all the clips accordingly. Here is a demo of one instance where I had two video tracks of clips and I attempted to move one line of clips on V1 which had 6 clips and after trying to move all of them to the right, the 6 clips were overwritten to 5 with some of those clips heavily shortened.

10 - Can shortcut keys be added for these seek buttons in Advanced Keyframes: 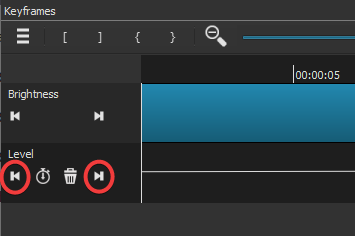 How about just underlining the name of that parameter?

Underline is ugly IMO. In the next beta 19.12.09 I am preparing now, I put “{ }” before the labels in the new Gradient filter so people can see it and give an opinion.

1 not new
2 broke in v19.09 and is minor, but I will probably fix it
3 is a new change and working as expected
5 I need to revert a bug fix that is causing more trouble than worth.
7 is working as intended even if not what you expect. Moving multiple clips without ripple on does a lift and overwrite operation on each one-by-one. It is hard to predict what you will get. With ripple on, it pushes using the left most in the selection using the new beta 19.12.09
9 & 10 Not now

As you can see moving multiple clips is tricky not just for the programmer but also for users to predict what is going to happen in many cases. There are so many corner cases. But it does not stop people from begging even if it is going to destabilize.

UPDATE 3:
I think 7 is kind of a big deal and is going to throw a lot people and use cases. I think I need to change the logic to first lift every selected and then overwrite with everything selected. That is a very big change with a lot of work. So, I am going to disable multiple move for this release to rework this area more.

I uploaded a new version 19.12.09 to the beta page and removed the older one.
It fixes: