I’ve mentioned in the past quirky behaviors I’ve noticed in Shotcut, though typically they don’t bug me enough to bother with them (i.e. they’re easy to work around).

This one is really odd and I don’t get why it’s happening (and while I can work around it I’m just not in the mood).

What I’m doing is creating another video for my Youtube channel and I have an object on one track (Titane).

Notice in the upper right hand corner, there’s a duplicate of the first object (circled in red that’s on a track above it.

Though if also take a look at the ‘Size, Position & Rotate’ panel of each object, you can see they’re not only exactly the same size, but the same position.

My question is why aren’t they occupying the same space. If anyone can see in the data the control panel shows that would cause this I’d appreciate knowing about it though I should mention that I have done this before, and there typically isn’t a problem.

I am not convinced there is a bug here, and you have not explained it very well since both screenshots show basically the same thing (the same instance of Titane logo.png with its filters).

you can see they’re not only exactly the same size

Yes, I can see that, but I cannot see the parameters of the other TITANE image’s Size, Position & Rotate filter. Maybe you have a different Size mode selected for the other. In the Fit mode, the position of the image within the bounding rectangle is not always flush top left.

Philez, I’m having trouble understanding what “isn’t occupying the same space” in your two screenshots, and I don’t really understand the point you are making about the circled text. The “Titane” text in the SPR filter doesn’t look any different in size to me from one to the other. (May just be these old eyes …)

Can you say a bit more?

Sure, the point I was trying to make is that there’s nothing different between each item (except that one is on track 7, and the other is track 8).

And I should mention that one reason I’m reluctant to post issues here is that people oftentimes – as opposed to asking for more information as you have done in an effort to better understand what I’m seeing – make assumptions that dismiss any problems.

As I said, they’re EXACTLY THE SAME, only on different tracks (as I showed in the picture).

There should be not difference at all between the objects, because they don’t differ in any way. I should also mention that adding a new track it works fine.

Now why this doesn’t work on track 8 and does on track 9, I have no idea but it’s an error that’s repeatable.

As far as I can tell, that’s a bug (I’m thinking of making a video of it).

Not able to duplicate bug or issue.

It appears to me that both for your screenshots are from the same exact clip. It’s unclear to me what the real issue is. Not sure if you want the smaller title in that position, or if it’s unintentional. My apologies for not understanding.

In an attempt to recreate the bug, I will use 10 tracks, 9 of the tracks will contain a png file with all of the same SPR setting of 59.6% zoom. 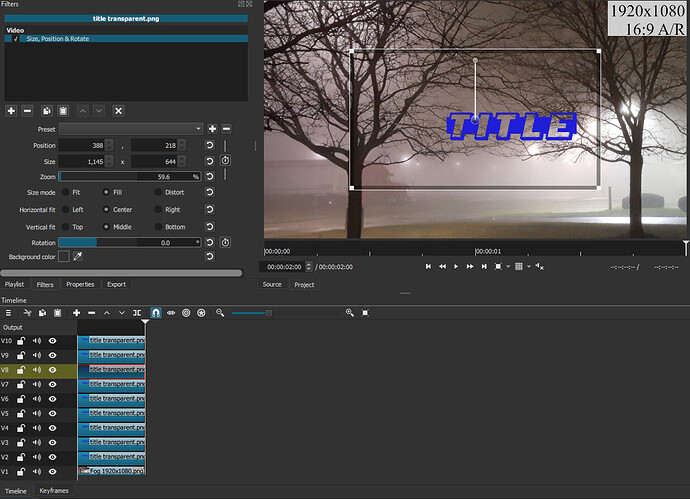 As I said, they’re EXACTLY THE SAME, only on different tracks (as I showed in the picture).

The reason why I think your duplicate screenshot is on the same track is because when you click on the clip on the other track, it will show the VUI around what you have circled in red.
Note: I have intentionally changed the SPR settings on this one clip in this example. 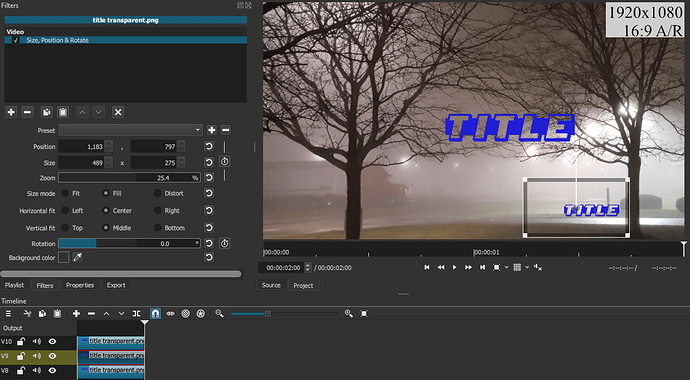 A video would be a great tool for us to understand exactly what is going on.

If so, make sure that you really do have the relevant clip selected - not the track (unless you applied the filter to the whole track), but the clip itself. I say this because I have cussed and sworn gently remonstrated with myself after finally realizing that I kept applying a filter, not to the clip I was VIEWING (under the playhead), but rather to the clip that was actually SELECTED (not under the playhead).