Looking at @TimLau’s tutorial video here had me notice that dialog that comes up when wanting to insert track that I never saw before. A couple of things:

When I tried to get that dialog also, on Windows the dialog appears lower in the screen than it does on TimLau’s version: 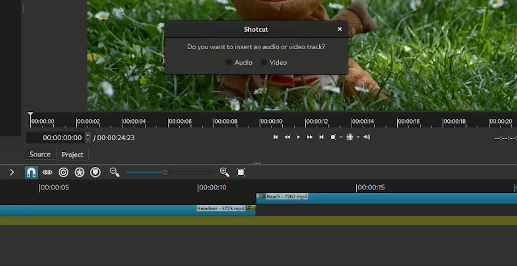 Can the Windows version be fixed?

And what exactly is the logic for the dialog box to appear? I never saw it before and it only seems to appear based on specifically selecting the track head for Audio and only when there is just one Audio track. Other times it just inserts a video track. Wouldn’t it make sense for it to appear every time “Insert Track” is called on?

Our code is not positioning the dialog. The UI library is determining that, and I do not want to try to add our own code to do it because there are tricky cases and there will likely be a bug introduced somehow.

Wouldn’t it make sense for it to appear every time “Insert Track” is called on?

No, because we do not allow interleaving track types. Only when in you insert on the top-most audio track is there any ambiguity about the type.

The move track up and down, just merged will solve the need to use this workaround to add a video track at the button

What I mean is that if you can move a newly added track up and down, it does no matter where the new track is created in the first place, you add it on the top an move to the location you want it.