Hello,
I think there is some bug in Shotcut new version (201031).
Made just a small clip to make a simple dissolve effect, second clip overlaps the first clip four seconds.
Saved the project and exported the video.
The dissolve effect is not seen in the saved video with the new Shotcut version.
Loaded the same project in the previous Shotcut version, all settings the same, nothing special, the dissolve is seen.
Attachet 3 files : The saved project, both video clips, one with the new version, the other with previous version.
System is win 10 x64 1909.
Answers wiil be appreciated
Thanks
Motim
ps. Excuse the bad resolution, had to reencode the finished

There is no bug here. I was not able to reproduce it with your project file. You might have a bad install. Reboot, uninstall, and reinstall.

See the cross-faded burned-in timecode in my screenshot below 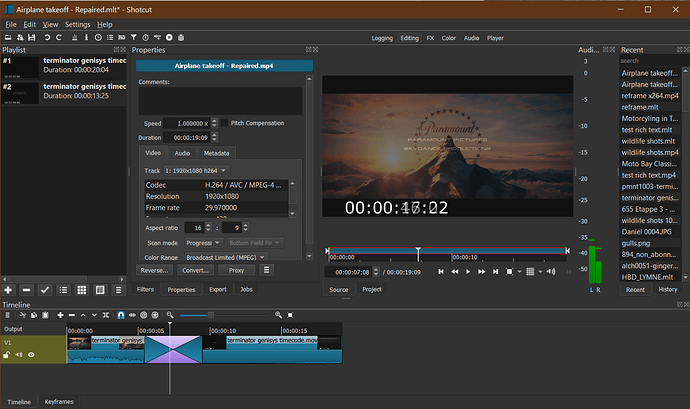 Hello,
Thanks for the answer.
I wonder, its really strange.
Uninstalled, rebooted, reinstalled the program(201031).
Loaded the same video, made two short sections, loaded one section on the timeline, then loaded the second section overlapping 4 seconds on the first section.
Played the video on the timeline, the dissolve transition is seen. Saved the project, exported the video, there was no transition.
Closed the program, opened it and loaded only the project file (.mlt), did not touch any settings, checked on the timeline and exported the video. This time the transition was seen.
Well, I wrote it looks strange to me.
It did not happen in the previous version.
Thanks again for the answer.
Motim

What does Shotcut show for the source video Properties?
Can you provide a screenshot of the Properties window?

Hello,
Attached screenshots as you asked, video properties and settings to encode the video.
And by the way, downloaded the new beta version, made same “experiment” with the same video clip 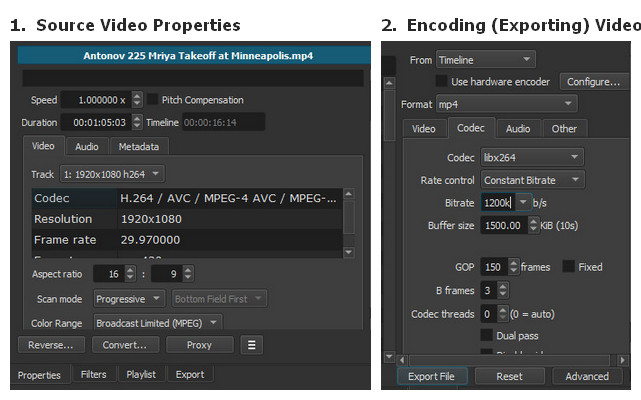 I was able to find the source video.
20.10.31
This is exported with your MLT, default settings.

Hello,
Thanks for the answer.
With all the respect, what I see in your screen shot, is the video playing in the timeline. And I wrote the same on my respond 2/6 Nov 18, that I see the transition on the timeline but not in the exported video.
Motim

Hello,
Made again several times the same “transition experiment”, same video, same settings. The so called “bug” (I named it) has not appeared again.
Don’t know what to say, except that I am sorry I bothered you with this.
It happened once or twice, had to make more tests.
PS. Program version 201031
Thanks
Motim