Hi, I’m fairly new to Shotcut and loving it, but while making a “lower third” in my video, I had the following problems. Running Shotcut 19.12.31, using OS 10.10.5 on an iMac. Thanks for any help you can offer.

The tracks at the beginning of the project would not show the desired effect (below) with the purple bar at all, yet ones later in the file showed correctly. After a lot of trying to figure out why, I eventually realized that immediately after a cluster of short clips at the top halfway through the project, the purple effect showed as it should.

Not only does having the track located in the beginning affect the tracks above it, but clicking to “Show” or “Hide” this track changes the way the other two show, despite them both being set to Show, which should not allow a track under them to change what’s showing up from them.

Here is the goal format/image that I was able to get sporadically (with me looking stupid), followed by
Video tracks 1 and 2 set to Show while track 3 was set to Hide, and then the same with track 3 set to Show: 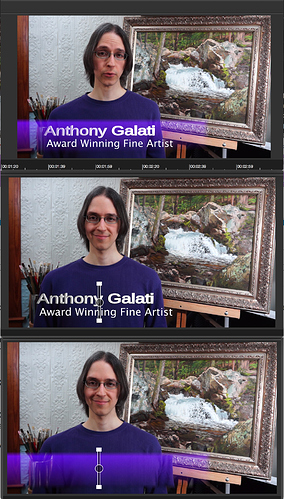 Messing around with them, I can sometimes get the purple and the text to show at the same time but it’s not easy

Sometimes in some configuration I can’t recreate now, when I repeatedly clicked to Hide or Show track 2 (with a gradient filter), the purple showed brighter and brighter each time until it became pink. This is without changing the settings on the filter at all. Then I think Hiding and Showing the track 1 above it would reset the purple back to the actual color it’s supposed to be.
There were also two or three times that turning the track 1 Text: 3D filer on or off also affected how the purple bar showed up, which I think was sometimes the pink over-saturated version.

With the project not showing correctly (no purple bar), I exported a video just to check if it would process the right way and maybe it just wasn’t showing right on screen, but the video did not show the purple bar, just the text as it looked when I sent it to export.

Thanks to the developers for making such a powerful free program.

I have not had a change to look into this yet, but I should mention that the Gradient filter is intended to be more a full frame gradient tint effect. You are likely running into problems trying to use it to drawing a gradient rectangle. The next version will have a new filter to draw a rectangle optionally with a gradient that may avoid this problem.
Your project description is not clear. To use, “video track 1” is V1, which is on bottom, but you say on top. What is on that track? Then, you say “video track 3 under”, but that is the bottom track. Every upper video track composites onto that bottom video track rather than (top->middle)->bottom.

Hi Dan, thanks for your response. Sorry, the track names were just for the sake of explaining in the situation. To use the program default names, my file is set up as follows (all with video clips):

I went back and looked at a separate quick save version of the file I made when I got the setup to basically work as planned. In it, keeping the Mask filter on and turning off the text filters for V3, and turning on gradient and the two text filters in V2 allows the text to show over the purple gradient through the rectangle shape (with a slight purple cast, but it’s passable).

A new rectangle gradient filter will be great in the next update! If there were a way to adjust the opacity for it, or also add an outline of a selectable color, those would be extremely useful.