I tried the open other, device, directshow,… then selected my webcam (windows 7 64 bit)

the camera video came through but how do we capture the web cam video?

any insight on how one captures the video/audio to use as a clip
(or is this still in development?)

To capture, after the device is opened and playing, go to Export and click Capture File.

Thank you for the speedy reply

shotcut and mlt are fantastic by the way

I tried your advice about “export” for the webcam capture

(1)as soon as export starts the video picture from the webcam ,as seen in shotcut player, freezes…so Isee webcam input at all during capture after the “starting frame”

(3) captured sound from the web cam is also the same

When I tried to capture sound alone from the webcam I had nothing captured.

So I assume the feature in windows is still in development

but that is not my real goal here …

to record audio, while viewing a video in shotcut,

so that it would turn out as a

(both videopad and filmora have voiceover features… a screen of the video clip pops up with an audio record button so we can sync recorded audio voiceover narrations to the video and then, when recording stops ,it sets the recording into an audio track alongside the video clip)

I too have a problem with webcam video capture. It seems a bug has crept in. As for the audio-only capture, I tested by choosing the WAV preset before clicking Capture File, and that worked OK. If you do not choose an audio-only export preset, then it will try to include video (white “blank” video in this case), and that might be causing a problem. I too have been thinking to add a voice-over recording feature. Can you try audio only again by using the WAV export and give your feedback?

so it works, got the audio only this way (as wav)

actually checked it over,
it captures audio (only) from microphone or even from webcam mic

and to all audio only exports I tested wav, mp3, aac, wma

further testing
if a video project is open, videos on tmeline,
and I capture audio from microphone
then, the audio file (wav or aac) is saved
but
Shotcut crashes

DirectShow capture has been improved for the next release. Now, it will always capture in the background when you click Capture File (instead of simultaneous preview and capture). This lets you play the timeline or even open a new clip and play it while you narrate.

Trying to capture from my MS LifeCam, SC 17.02.01 stops responding right after I select the [direct show] video and audio source and pressing OK.
Is the LifeCam not supported perhaps? 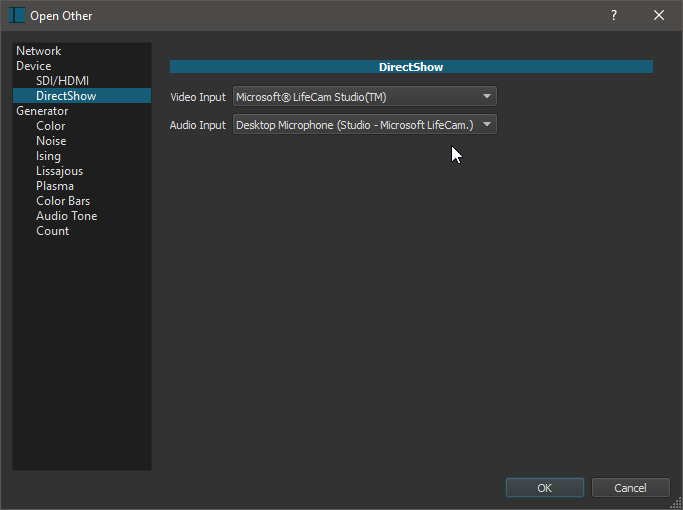 This is what I reported earlier. My understanding (Please Refer to the above discussiony) is that there is a bug in this procedure that will be fixed only on the next release of Shotcut.

For now you will have to do as I do… capture webcamera input via another program dedicated to webcamera capture and then move the captured input file to Shotcut for editing.

Shotcut, after all is a video editor… and a darn good one… not a webcamera program…

To even have such a feature as webcamera capture is really just “glorious sugar coating” iced on the cake,

So meanwhile work around it for a few more weeks as I do and enjoy the wonders of having such a program.

This is what I reported earlier. My understanding (Please Refer to the above discussiony) is that there is a bug in this procedure that will be fixed only on the next release of Shotcut.

We’re already using the next release after your January report, Ray.
Hence my post.
Thanks

I thought Dan meant the next release after this one that I use, that is 17.01.02
That is why I was waiting.

With the current release 17.01.02 I had noticed no difference at all.
All my previous comments still hold.
Which made me think that the bug fixes were to come in later releases after this one.

Since obviously 17.01.02 did not remedy this problem at all,
it must be that what Dan Dennedy meant was
not the release 17.01.02 but the next one after that.

So will give it a try … but given you reported problems … I wonder if all the bugs
are worked out yet?

As any developer knows bugs are sometimes difficult to swat.

It is working for me with a Logitech HD Pro webcam. I tried a few different settings such Video Mode and Realtime (not GPU processing) to see if there is a combination that causes a problem, but I have not found a problem yet.

No, nothing here. Best I can get is audio with a totally white video capture.
I can capture just fine in Windows MovieMaker or Debut then import into SC…

But, as soon as I hit export the video/sound disappears from the screen but returns when I stop recording.
Don’t know if I like that … sort of like recording blind. Don’t know what you’re recording till afterwards.

Also tried pausing between the open other, selecting webcam (when video,audio are seen)
and the next step of export… to see what happens.
It seems to timeout so webcam input disappears after a while (too long a pause between openother and export).
Also if I click a vido track the webcam input also disappears.

Once the program crashed… (don’t remember what I clicked between openother and export) … trying to
reproduce the crash but no luck so far. Clickikng somewhere just eliminates the webcam but doesn’t crash the
program. Will try experiment with different things.

Overall though, if go immediately from step1, open other, to step 2, export, then all is fine…

First of all, thank you Dan, Lauren, Brian, and Harald for such fantastic video software, and being so well-known that I found it on google right away.
While at first it felt intimidating, watching many of Dan’s tutorial videos on youtube makes it so much easier to use.
I wanted to chime in on this topic here with an update:
As of v17.12.03 that I have, shotcut does not crash (yet, lol) when I Open Other - webcam. So that’s fine.

The strange thing however that contradicts somewhat all your experiences above is:
With mpeg4 export format already selected (there’s no mp4 in my list), under DirectShow clicking
video input Toshiba webcamera HD (Satellite) and audio input 2-Sennheiser USB headset,
OK,
I can see myself in the webcam and hear any noises I make,
but the Live counter seconds are already running - without having clicked Capture File…

It gets more odd, when I now click Capture File and give it a name,
Save,
then the camera and sound capturing STOP, and the Live counter sec STOP,
although I haven’t yet clicked Stop Capture.

Shouldn’t it be exactly the opposite? starting counting when starting capturing (and saving in the background like Dan explained), and STOPPING when I click Stop Capture

Whatever. Then when I indeed click Stop Capture, oddly NOW the Live counter starts again, and instead of any recorded webcam stuff it shows INVALID in large in the movie area.

Whatever. So then I click “Export file”, give it the same name yet again, but now it says “Error, you cannot write to a file that is in your project”. Well, that project didn’t seem to work. And I can’t figure out what’s wrong, whether or not you agree it should behave exactly the opposite.

Or is this too part of the bug Dan mentioned?

Whatever. This is my feedback for it.

There are many webcam recording tool for you such as Free2X Webcam Recorder, SplitCam, RecMaster, CamDesk, etc. Hope this helps you.

That would be not the best option, most of them are end user based, and are not that customizable. And the original poster seems to be more advanced as he knows one of the things that is mostly not easy for a normal user to find.

I would recommend OBS because it’s more professional and customizable, it also has plugin support, so it can do a lot of stuff before post to make our work easier.