Are the developers of MKVToolNix seriously expecting you to enter a chapter time that has a precision of 1 billionth of a second?

Social media like Youtube and Vimeo require chapters, when input, to be rounded to the nearest second (not billionth of a second), as produced when Shotcut exports markers

In my opinion the MKVToolNix developers should accept input in this “pseudo-standard” format and not expect everyone to add a decimal point followed by 9 zeros for every single chapter.

Admittedly, the chapter time recorded in the MKV file is recorded as billionths of a second:

but to expect end-users of their software to input the second to 9 decimal places is ludicrous.

I agree with you that using 9 zeros is very too much but Shotcut could export with a precison equal of a frame step time (= the same precision than for the definition of the markers in Shotcut).
Indeed, in shotcut, the different time properties of clips are given in HH:MM:SS:Frame.
This could be the same when the chapters are exported.
For example, a time defined in shotcut by 01:12:34:06 (in a project defined in 30fps) could be exported in 01:12:34.20 (where .20 is equal to 6 frames divided by 30 fps).

True, but then users feeding the resulting file into YouTube etc. (probably a lot more than are using MKVToolNix) would have to edit it first to remove the decimal part, in a similar way as how you add the “.000000000”.

An option for the precision would be best, but I suspect it would be low on the developers’ to-do list.

What editor are you using? If it is an editor that supports regular-expression replacements you could add “.000000000” to every second with a single global replacement of:

YouTube recently introduced chapter marking by name and it loosely relates the Chapters in a story or Scenes in a Film/Video-Story/Play.

That would be the natural way to go rather than use Clapper style numbering imo. 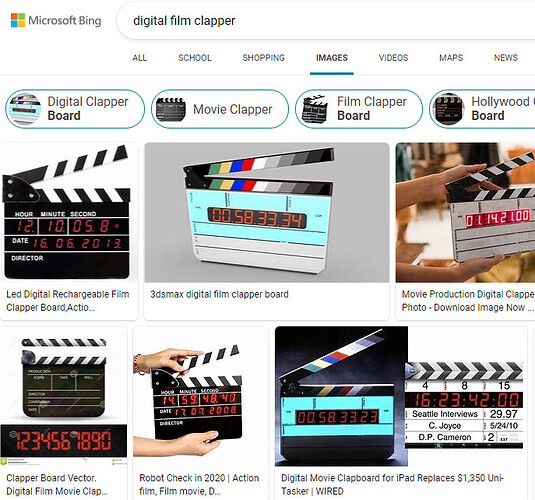 Video Chapters break up a video into sections, each with an individual preview. Video chapters add info and context to each portion of the video and let you easily rewatch different parts of the video

How does that work?

I’m fairly new to Shotcut. I had to watch a YT video to see how the Markers setup actually worked. It’s effective but a little convoluted.

I could make a case for how to streamline the UI to make it work in a more logical manner.

For example, being able to generate the YT Video chapter information automatically into the Project Notes area rather than a file. Then it can be copied and pasted over.

Maybe it does work that way already but at the moment I haven’t seen it.

In fact, why stop there. The chapter-markers could be set up before as a Production Design task within the “Storyboarding” Production phase. Then left there. In the final Edit, just move the Markers to where they actually need to be.

I’ll be using the Notes section within Shotcut to write the Script for each video in the Industry Standard Script format. 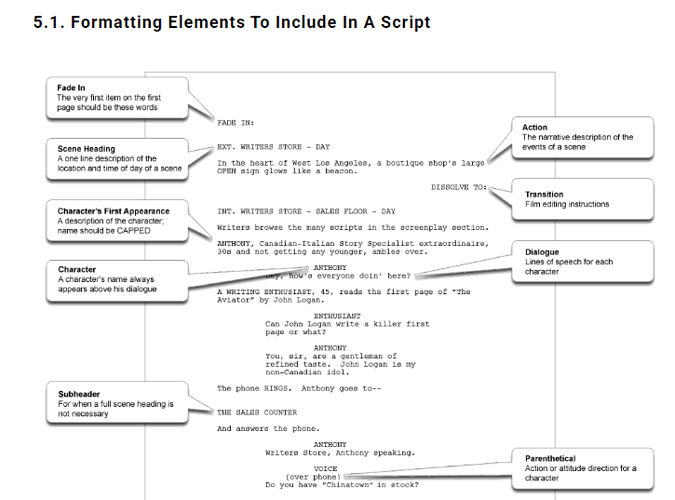 So, if you have the Script, you already have something that can be parsed by the Computer Software to get the list of Markers that you need. You only need to adjust where the Markers sit.

Here’s some more about Script Formatting:

Since there is massive downsizing happening in the Film/Video Sectors, there are many people already trained in how to write in the Industry Standard Script writing style. That style already includes Scene/Chapter Markers so it’s just duplication of work to have to repeat it again in Editing if you’ve already done it when you wrote the Script for the video in the first place.

For example, being able to generate the YT Video chapter information automatically into the Project Notes area rather than a file. Then it can be copied and pasted over.

The majority of people who will be wanting chapter information out of Shotcut will be needing it to feed into a social media site (Youtube, vimeo etc.) for their video and the current way of exporting markers is sufficient for that. People who create movies with proper movie screenplays, probably use more professional tools than Shotcut. So making an educated guess, I suspect that there is little call for any further development of “Marker Exporting”.

Movie screenplays are not so easy to parse and there is no timestamp associated with the scenes. The only “timing” in a movie script is by page number, i.e. 1 page is supposed to represent 1 minute of time, which isn’t very useful for setting marker/chapter timestamps. So now you have to create the markers anyway and somehow have to associate them with a scene in the movie, since surely not every scene will constitute a chapter.

To me the easiest way is to export the markers file and either cut & past the chapter title from your screenplay, or somehow use a script to do this. If you are going to “burn” these into an MP4/MKV file you will need this file anyway.

What could be useful is the ability to IMPORT markers from a file. In the past I have edited an XML file to insert XML markup for markers, but an import feature would be better. However, how much use that would get is debatable.

That’s a huge bunch of the potential audience for Shotcut to exclude !

I don’t know how many of the so called “Professional Tools” (looking at you Premier Pro) but they each have their frustrations as well.

My view of Shotcut is coloured by @bentacular and his YT videos which present SC as a cut down Editor that’s fast and effective to use. The name “Shotcut” is a parody on “Shortcut” if I’m not mistaken so I’m sticking with that.

Movie screenplays are not so easy to parse and there is no timestamp associated with the scenes.

I’m only trying to use the Script for preVisualisation and Story creation. With big Productions there’s an argument that the Script should be thrown in the bin by the time that it reaches Post-Production. If it’s a smaller Production then I wouldn’t be so sure. Post-Production Editors would typically get the script.

The way it’s going with Technology at the moment, it’s hard to even see a role for Actors in the future according to some patterns. So much can be done Synthetically. I’d hate that to be that way.

The point is that after the text is converted to audio speech you do have an approximate time for the Scene. It’s a normal part of Editing to shorten (and lengthen) scenes so that’s nothing new.

In a PreProduction or PreVisualisation setting, you want to get an idea of how long the Production is going to be.

Of course there is the 1-minute per page notion, but the next step from the script is to make that work bringing in all the transitions, action and B-roll. Even using that, would give you enough information to create Markers throughout a video if you have the Script. You could then fine tune them by moving them left and right.

All of this relates directly to Chapter Markers and Scene length.

Yes, that’s what I was saying. Read them in from a Script file or enter them in Notes or somewhere else. I’ve got a preview of that in video here:

An option for the precision would be best, but I suspect it would be low on the developers’ to-do list.

That’s a huge bunch of the potential audience for Shotcut to exclude…I don’t know how many of the so called “Professional Tools” (looking at you Premier Pro) but they each have their frustrations as well.

No-one is being excluded, but I have yet to see a blockbuster movie that was produced with Shotcut, while there are tens of thousands of Youtube and Vimeo videos that have been produced using it. The goto video editing software for professionals is one or more of:

There are loads of movies that have been produced using these (“Gone Girl”, “Deadpool”, “Hail Caesar”, “Jurassic World: Fallen Kingdom” and “Mission: Impossible - Fallout,” to name but a few). Adobe has 26,000 employees, admittedly not all working on Premier Pro, but I don’t see Shotcut (with realistically speaking 2 developers) positioning itself in the same professional league as any of the ones above. Having said that Shotcut is the best FOSS video editor I have used and the help from this community on this website is worth a hell of a lot.

I applaud your efforts in using Shotcut and developing tools to make it easier and less repetitive to work with. I too like to develop tools for Shotcut in a similar fashion (Shotcut - Elusien's Contributions), though I prefer HTML/CSS/Javascript for a more universal takeup (everyone has a browser on their system).

No-one is being excluded, but I have yet to see a blockbuster movie that was produced with Shotcut

Because Shotcut isn’t at the place yet where the needs of a movie production would be fully met. But that doesn’t mean that development to work towards it so that one day it could meet those needs shouldn’t happen. Any features and improvements implemented that continue to move forward is nothing but a good thing. If aiming that Shotcut one day be a program that can be used professionally is discouraged then it just becomes a self-fulfilling prophecy, doesn’t it?

Aiming high is a good objective and not to be sneezed at, after all Adobe started with just 2 ex-Xerox employees and now they have 26,000 and a net income of around $5 billion.

When I first started using Shotcut it was a good FOSS NLE, when Dan introduced keyframing it jumped in usability by several orders of magnitude.

Perhaps it is a little unfair to compare Shotcut with the likes of Premier Pro, Blender might be a better comparison. The Blender Foundation has about 25 full-time employees, but it also has hundreds of contributers around the world: studios and individual artists, professionals and hobbyists, scientists and students, VFX experts and animators, and so on. Again, this is something that Shotcut is lacking.

I’ve tried to “do my bit” for Shotcut by providing resources and participating in the Forum. At the moment I’m working on tools for generating greyscale masks simply, and would like nothing better than for Shotcut to jump in usability by another order of magnitude. But we have to be realistic and can’t expect Dan and Brian to come up with game-changers like keyframing without a lot more assistance at the coding level.

I too like to develop tools for Shotcut in a similar fashion (Shotcut - Elusien’s Contributions ), though I prefer HTML/CSS/Javascript for a more universal takeup (everyone has a browser on their system).

Nice work. When I started with SC I was under the impression that they worked on the current version. I too think Javascript is flexible in that it allows access to more external resources. It’s a shame not to support those resources. Especially threejs.

there are tens of thousands of Youtube and Vimeo videos that have been produced using it.

That’s a decent User base.

If the User base is smaller Productions then that would be what to focus on. Finding out how their Productions could be streamlined.

I can’t see why targeting Youtubers and Vimeo Producers directly would be a bad idea with a piece of Software oriented ever more towards their needs.

A stupid thing like “Chapter Markers” can turn out to be an important selling feature and I’d put it on the list as one of those things that would be important to tweak to get the UI just right. It doesn’t seem to have anything fundamentally wrong with it. Maybe it’s not perfectly intuitive so it’s probably 75% there already.