First off, just want to say that I’ve been using Shotcut since the start of the year to grow a YouTube channel. After having used Shotcut to edit over 30 videos now, I wanted to thank everyone that contributes to this project as it is a great piece of software to use and has helped me massively this year.

Just this week, however, it has started playing up for me. When playing back a video in Shotcut (not dragged it into the timeline at this point, just double-clicking a video from the playlist tab) the video lags behind the audio by less than a second or so. Also, the audio would sound ever so slightly slowed down and would be crackling quite loud.

At first, I thought it could have been the video file I was using (.MOV), but it plays fine in VLC. If I use Convert to edit friendly…, the problem still persists when converted to a .MP4.

I have also opened some previously finished projects that have already been exported to YouTube and they have also turned bad and the same thing is now happening to those (video slightly behind, crackly audio).

I am using the latest version of Shotcut. I’ve tried reverting to a previous version, but the problem persists.

I don’t really know where to turn from here, which is why I’m hoping someone in the community will be able to help.

Could it possibly be a driver update, video, audio? Yesterday was also Windows update day.

I noticed that there was an Intel graphics driver that needed updating. I updated the driver, restarted the laptop and the videos started playing perfectly.

I then shut down the laptop and restarted it again after a minute or so, went to play the videos and they had gone back to being choppy.

This isn’t the first time this has happened either. When I least expect it, I’ll give it a try, and it miraculously works, but then the next time I go to use it the problem has come back again…

It depends on various Settings: Video Mode, Realtime, Progressive, Preview Scaling, and Interpolation. The defaults give good performance when playing back a video in the Source player with no project opened or started:

It can also be affected by Settings > Display Method where the Software option is much slower.

I then shut down the laptop and restarted it again after a minute or so, went to play the videos and they had gone back to being choppy.

If the performance of your computer is marginal for the difficulty of your project, it might work fine after a reboot. But then, after some other applications are opened, it might start to play choppy. As a test, make sure that absolutely no other programs are running and that your antivirus isn’t doing a scan behind the scenes.

Hi Brian, I’ve ensured no other applications/tasks are open whilst I use Shotcut. I also disabled my antivirus but unfortunately, the problem still persists. Would anything in the application log help…?

It seems as though the audio is the issue. When I hit play, the playback of the actual video seems normal, very smooth. The audio however will sound sped up when I hit play for a moment (causing it to go out of sync) but then return to normal speed, by then it’s already out of sync though. But the audio is crackling the entire time.

Enclosed is a clip of the audio issues. No matter which part of the video I press play from, it always sounds sped up at the start.

It might be a problem specific to this video file within Shotcut regardless whether converted or not. You should test with other clips from a different source including some known good ones from a previous project where you did not have a problem.
You can also ensure the video matches the source, turn off preview scaling, and compare your settings with the defaults in my reply. Also, test playback of a video file in the Shotcut Source player with no project loaded.
You need to do various tests to narrow down under which conditions the problem occurs.

I agree with Dan that it is probably something unique about your source clip (14062022.mp4) that Shotcut is not compatible with. If you are able to share your source clip on your google drive, we might be able to investigate deeper and get a better idea.

I’m leaning more to 8GB RAM and fact that been doing months of work on laptop. How many other programs loaded on the computer. Also have all the old videos been backed off the machine to give SHOTCUT plenty of breathing room. the screen on a XPX13 laptop is quite small for editing video; I’m amazed that you can do it. Are you sure that you didn’t move the audio by accident? All that said I’ve found that by doing multiple saves and exports during a project my OPERATOR errors on my part have been coming down.

Other things that will mess up your playback are filters. Did you try exporting the video to see if the audio truly was off?
Just some ideas.

I have tested it with known good videos from a previous project which are already uploaded to YouTube but they have also gone bad too.

I don’t usually have anything else loaded on the laptop whilst I am editing.

But when this issue does occur, it also affects previously known good videos which are already uploaded to YouTube. It’s so strange how it will start randomly working when I least expect it, but then the issue eventually comes back and affect all (new and previous) clips,

In my experience this occurs when the system is busy doing other things. It could be from a low memory situation, but in my most recent experience similar to this Windows 10 was doing many updates in the background. Likewise, it may occur when Shotcut is busy doing stuff in the background: active jobs in Jobs or building a waveform for a new file added to the timeline (waveforms are cached but there is a rather high maximum beyond which oldest ones are removed from cache).

How is your media stored?

What Video Mode settings are you using? Automatic, or something else? To find out click Output on the timeline, and click on Properties. 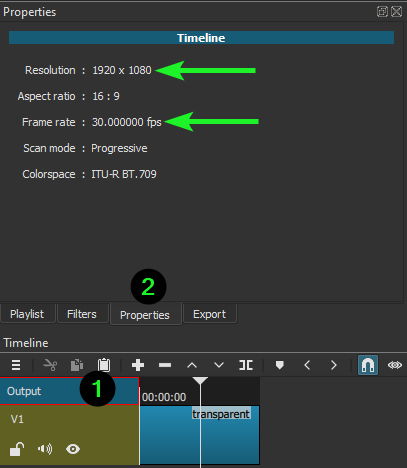 What are that clip’s video & audio properties? Go back to the playlist, double click the video, then click back into Properties. Please share a screenshot of the Properties window. Within that same window, there is an audio tab, click it and screenshot that as well. 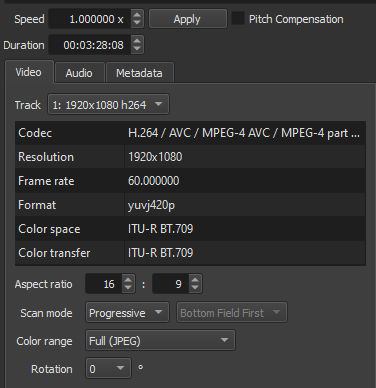 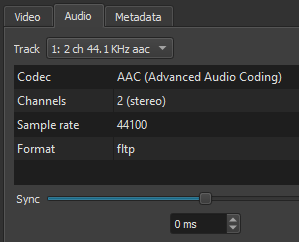 Staying on the Properties window Audio tab, there is a track selection. Click on the little down arrow. How many tracks do you see? Normal would be just 1 track.

In this example just 1 audio track is available for just this 1 clip/video file.

Some have multiple audio tracks on one video file.