Hello everyone. Been using shotcut for couple years. I play video games of many sorts. Expanding my YT channel with new game content, I recently started recording my game experience on Civilization VI.
While playing Civilization VI, the loading screen into your game, showing your chosen civlization, shows a scripted readout on the screen summarizing the Leader/Civilization you chose to play as. During this “loading screen” although you can read the words your self, an in game “VOICEOVER” is also reading it out loud to you. Same time as your hearing the in game voiceover (not my own voice), their is also orchestrated music playing in the background. Both the voiceover and the music seem equally balanced, where I can hear the voiceover, over the music, but I can hear the music along with it.

However, when I try to use that recording in ShotCut, I can barely hear the voiceover. Very lightly, the orchestrated music is too loud. I thought it would be possible to some how split the two sound waves from the recording, so I can increase the output for the voiceover, without increasing the output for the music. I did extract the sound wave from the video recording, and remove the video feed, and Export it as an MP3 file, and imported into Audacity audio/sound mixer/editor/recorder. But I can’t seem to split the two audio waves, I don’t know how.
With just the sound file alone, things I’ve tried! (on shotcut, not Audacity).
I tried adding a Limiter Filter, and increasing the Input Gain, but no matter how high I increase it, it also effects the music. I tried Adjusting the Limit bar, to bring down the music, but any potential voiceover I hear fades out even more. It seems with both audio waves still attached, anything I add for one effects both!
Obviously, increasing the Gain/Volume with said tool, effects both, still can’t hear voiceover over the music.
I haven’t tried any other tools, I still learning what they do.

I include comments about Audacity only to explain what I tried. I am not asking about ANY advice how to use audacity! TO BE CLEAR! I’m only asking here if Shotcut has any thing I can use to solve this. If anyone here is also familiar with Audacity? Feel free to cross comment any suggestions!
ANY Help is appreciated!! THANKS In advance, for the kind comments.

Audacity has a voice reduction and isolation filter. Sometimes it’s a matter of changing the parameters until you can (for example) isolate the voice and then raise its volume.
In Shotcut there are different audio filters you can use.
-Band rejection. Where you can adjust the parameters and listen to the results. It also includes a Dry-Wet slider to mix a percentage of processed signal with original signal.
I got an audio from the intro of that game and tried with Bandwidth Rejection at a Center Frequency setting of 2950 Hz and Bandwidth 5349 Hz with a Roll-Off Rate of 1.
In my case it was a girl’s voice and the settings may be different depending on the voice.
You can use the combination of two audio tracks. The original one to keep the orchestral music and a second track to do the vocal isolation.
There are also Low Pass and High Pass filters to allow only certain frequencies to pass through. All this requires experimentation and testing and listening to the results. 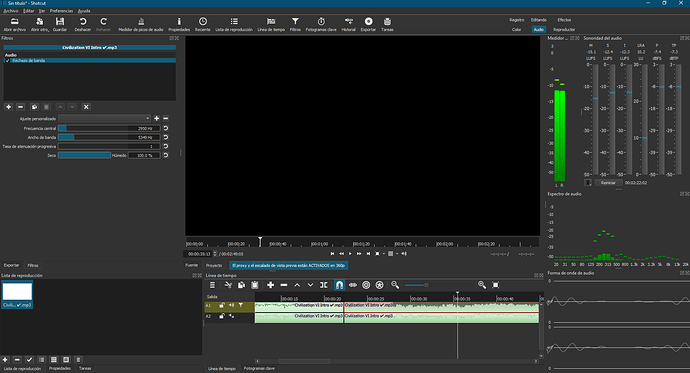 shotcut_Kx8jxMOaBM1920×1040 80.5 KB
Sometimes this is achieved by a combination of filters in the right order.
There are always overlapping frequencies in the voice and music, so achieving total separation is complicated.
Maybe it’s a silly question, but isn’t there an in-game adjustment to reduce the volume of the background music?
I guess not, but that would save you extra work.

How about a small sample of that audio to try something?

If it were me, I would go back to the original recording setup and figure out why there’s a difference between what I hear and what gets recorded. It sounds like a stereo signal got collapsed to mono (causing cancelation), or a surround signal got collapsed to stereo but is missing the center channel. If it’s possible to find the problem and re-record, that would give the best results. Shotcut isn’t going to mess up audio at the time of import. If there’s a problem, it’s usually with the recording method.

I have become so obsolete with multiple surround channels that I didn’t even think the center channel (where the voices are usually located) would have a collapse cancellation to a smaller number of channels. I always thought of stereo.
Thanks @Austin.

Another option could be the recording setup was fine, but it created an audio stream with three channels (left, center, right for this example). If Shotcut is in stereo mode, it may be playing only the left and right channels. It may be necessary to bring in a second copy of the audio file on a separate track and manually select the center channel to get it added to the mix.