Clips with the "fade out" filter not shown in the video

Bug:
I’ve noticed for a few times now that when after exporting the video, the clip with the “fade out” filter is there although nothing, just plain black.

Hopefully this video explains it: Example Video
(This is kind of hard for me to explain, since English isn’t my main language.)

I had this but too. Disabling and enabling the filter fixes it, yeah a temporary solution but it fixes it… Sometimes…

I also found a workaround and it’s temporary too. I click the clips with the fade out filter and move the playerhead around it.

I am not able to reproduce and no steps were provided.
As for the workarounds, none of those made any sense (seems impossible). since export runs in a separate program in the background starting from the XML (text) instructions.

[I’ll help you to recreate this bug (you may need to try it a few times in one timeline because it only occurs sometimes and it is not a rendering issue, it doesn’t show up in the player itself]

How I add subtitles to a video:
File>Open other>Color>(select transparent color)
place it above the video clip, add “Text: Simple effect” and Wa-Lah! You have have your text and it sometimes doesn’t show up with the “Fade Out Video” effect with “Adjust opacity instead of fade with black” (screenshot(s)) 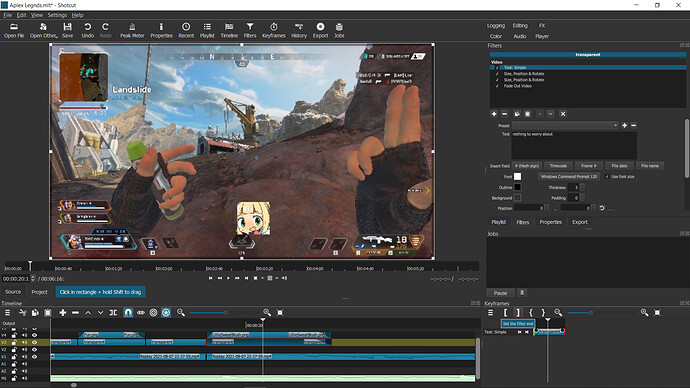 it only seems to affect the transparent color thingies, all the emojis in this ~6 min edit are visible
as I said it can be fixed by disabling and enabling it but I didn’t notice it and it kinda messed with my video but whatever
the fix to this would be to use the “Opacity” filter instead, haven’t tried it yet but I think it should fix the problem for now until “Fade Out Video” gets fixed.